We had been traveling for nearly two and a half months, were crossing into the fifth country of our trip, and realized we hadn’t really bought any souvenirs. Honduras seemed like the best place to choose something to take home with us, or, more likely, have the perfect souvenir choose us. What would it be though? There were too many possibilities. Malaria? No, that’s been done too many times before. West Nile? Do people even talk about that anymore? Plus, we could just get that back home. Zika, seems trendy at the moment. Ooo, Dengue, that’s a bit more unique and obscure.

Our travel day to Honduras represented a first in our travels thus far. In order to get from Santa Ana, El Salvador to our destination of Copan, Honduras, we had to cross two borders in the same day. First, we had to head back over the El Salvador/Guatemala border before continuing across the Guatemala/Honduras border. Sometimes, in Central America, what looks like an easy route between two dots on a map is often complicated by mountains, jungles, a lack of roads headed in that direction, or some combination of the three.

When planning our time in Honduras, we initially viewed Copan as simply a stop to break up the long travel from El Salvador to the Bay Islands along the Caribbean coast of Honduras. However, we ended up getting more out of the town than we had expected.

We arrived after dark on the travel day from El Salvador and just settled in, grabbed some local cash, and a quick bite to eat before heading to bed. The next day, we walked about ten minutes past the edge of town to visit the ruin site of the same name ($29.72 entrance for two). We had expected Tikal to be our last ruin site of the trip, but Copan had enough individuality to persuade us to spend a couple of hours there. First, none of the sites we had been to had anything like what awaited us in the trees overhanging the entrance. From the parking lot, we could hear what sounded like vendors using some sort of noisemakers that poorly imitated the sounds of birds. Maybe we were still shellshocked from all of the eagle and jaguar noisemakers we had been unsuccessfully persuaded to buy at previous sites (talking about you, Teotihuacan). Instead, when we arrived at the entrance gate, we were greeted by trees filled with the vibrant reds, yellows, blues, greens and squaks of dozens of Scarlet Macaws. Much like the monkeys in Guatemala or the rays in Belize, it was surreal to see these amazing creatures in their natural surroundings.

What sets the Copan ruins themselves apart from other Mayan sites is the abundance of carvings found throughout the complex. Much of the information about Mayan history as a whole was discovered through the interpretations of the well-preserved images found carved into the structures at Copan. We spent the morning staring in awe at the detail in the carvings of the massive ancient monuments and admiring the images along each structure, especially the famous reconstructed hieroglyphic staircase.

When we crossed the border into Honduras, we set aside our beloved pupusas and instead turned our attention to our next addiction, baleadas. Baleadas, which are giant folded flour tortillas filled with mashed beans, cheese, and your choice of meat, are a staple in the area. That day in Copan,we started with a few filled with chorizo for lunch (3 baleadas + a drink for $3.71), starting our near weeklong binge. Much like pupusas in El Salvador, we struggled to keep count of how many baleadas we had eaten during our time in Honduras.

That evening we also made sure to stop by The Tea and Chocolate Place located in the heavily forested perimeter of the town. Not only does the business serve up teas and chocolate drinks and sell a variety of cacao-based products, they have also been working to reforest areas surrounding Copan. We made sure to sample everything from dips and sauces to drinks and chocolates. We also couldn’t resist ordering a full serving of a hot chocolate and strawberry cacao cheesecake ($5.98 total). Yeah...strawberry cacao cheesecake. It almost made us forget that with each bite we savored, the tiny disease-spreading assholes were pounding down continuous shots of our iron-y red stuff.

One full day in Copan was all we needed, and the next morning we were in a shuttle van heading towards the coastal town of La Ceiba, continuing our journey towards the Bay Islands off of the Caribbean coast. Two vans and eight hours later, we arrived just in time to catch the afternoon ferry from La Ceiba to the island of Utila.

Most people go to Utila for one reason: to get their scuba diving certification. It’s the cheapest place in the world to do so. Unfortunately, we had known prior to arrival that was a bit out of our budget for this trip. Initially, we had debated if it was still worth visiting if we weren’t planning on going diving. After talking to a friend in El Salvador, we were convinced that it would be worth our time even to just relax in the water and do some snorkeling.

Utila, while small, was much more hectic than Caye Caulker in Belize. While walking around the island, you have to be alert to oncoming ATVs, motorcycles, and tuk-tuks. We almost lost a foot more than a couple of times. Luckily, we were able to find a getaway from the chaos of the town at the very end of the island’s main road. At this, much quieter, part of the island was a small bar operating out of a shack with a dock that stuck out into the clear waters. For the cost of a couple beers or a Cuba Libre ($1.65 each), we were able to hang out on the dock and swim in the surrounding waters. We spent two of our three days in Utila doing just that, always with no more than four other people around, often just the two of us. Swim ten yards out from the dock and you’re amongst coral, a variety of fish, and stingrays. Not a bad spot to spend a couple of afternoons.

Our second day in Utila, we had planned to do some kayaking, so we rented a tandem for the day, and as an added bonus, paid a bit more to rent snorkeling gear ($33.98 total). We spent the next fifty minutes navigating through the canal that bisects the mangroves that make up a large portion of the island. For the majority of the ride, the canal was barely wider than the kayak itself, and we were forced to hold our paddles near perpendicular to the water to propel ourselves in small increments at a time. The whole way through the canal, we repeatedly asked each other if the destination would be worth the effort. When we finally emerged from the mangroves and saw the perfect, uninhabited beaches and the openness of the ocean, we had our answer. We pulled our kayak onto a rocky island, which sat about a ten minute paddle through the choppy ocean waters away from the coast, and had the entire area to ourselves. We spent the day snorkeling around the reef, getting a bit too close to an octopus in the process, and enjoying the isolation and peacefulness of the essentially untouched side of the island. At one point, a small fishing boat with two men passed in the distance, otherwise we shared the waters and beach with no one.

This entire trip has been a series of countless, unforgettable memories, but this day is one that will undoubtedly stand above the rest.

The rocky island we pulled our kayak onto 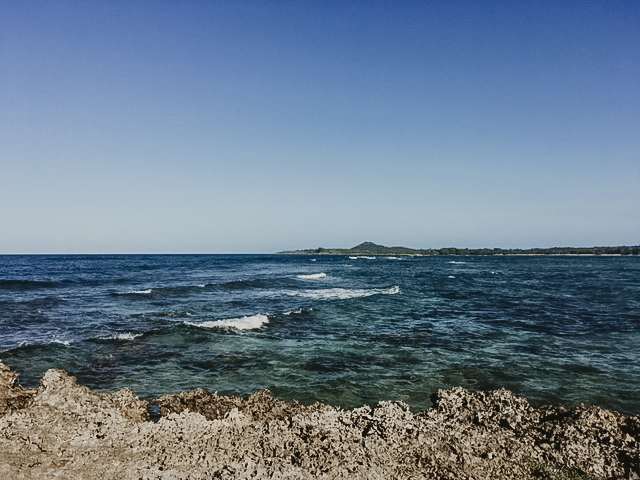 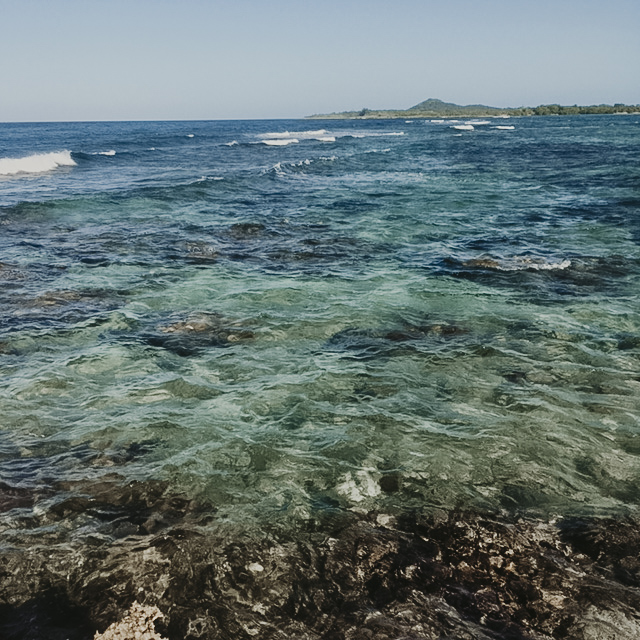 (Views from the rocky island)

There was, however, a cost associated with our visit to paradise. Around sunset, we realized that it was time to head back to town. We returned through the canal, only to be stalked by dozens of mosquitoes the entire way. It wasn’t long until our feverish paddling through the tight passageway turned to a tirade of ‘F’s, ‘S’s, ‘D’s, and ‘B’s. We frantically sprayed repellent on each other, using our paddles as swatters, trying not to lose our wills to continue living before reaching the other side. It had taken us fifty minutes to get through the canal on our initial trip through. It took less than a half hour on the way back.

This trip has had some less-than-positive memories, but this day is one that will undoubtedly stand above the rest.

A couple of days and more than enough baleadas later, we left Utila to spend some more time on mainland Honduras. There was no way we did not pick up a souvenir during our journey through the mangroves. It might just be a few days until we found out what it was.

Our plan for that day was pretty simple: take the 7:00AM ferry from Utila back to La Ceiba and wait for our shuttle to depart at 9:00AM to take us directly to our next destination, Lake Yojoa. As you’re probably guessing, that’s not quite what happened. As soon as we stepped off of the ferry, the driver for the shuttle company informed us that the trip to Lake Yojoa only operates Fridays and Mondays at the moment. It was Wednesday. Apparently, the lady we had bought the tickets from, back in Utila, didn’t have any idea of this and was never supposed to sell us the tickets. They offered to refund us some of our money and take us as far as San Pedro Sula, about two hours from the lake. We didn’t really have many other viable options, so we agreed.

Once at the San Pedro Sula bus terminal, our shuttle driver helped us find a chicken bus ($4.27 for 2) headed in the direction. This mishap actually ended up saving us some money, and after a sweaty couple of hours, we arrived at our accommodations with some lower back pain and a few extra dollars in our pockets.

For the two nights at Lake Yojoa, we stayed at D&D Brewery and Lodge ($30 for two nights). No, we didn’t stay there for the beer. It was about as good as you would expect for a microbrewery located in the middle of the Honduran jungle. We chose D&D because it was within walking distance of the lake, the largest in the country. Unfortunately, a few things prevented us from getting to spend much time at the lake.

We did make it to the boardwalk that traverses the marshlands on the edge of the lake. However, the boardwalk itself was not in very great condition, missing planks along the way and at one point becoming completely impassible. We headed back along the trail we had followed in, in hopes of following one of the adjoining trails to get to the other lake access points. Every single trail we turned down was eventually covered in yards of ankle-deep water. At one point, we even ended up in a field behind a little house. While all of this was happening, Felicia’s stomach was letting us know that we probably did in fact pick up a souvenir during our time in Utila. Accepting defeat at the hands of the mosquito-infested jungle, we turned back to the lodge, in order to be closer to a toilet and a bed.

Sadly, this is how our time in Honduras would end-- with Felicia in close proximity to a bathroom and preparing for our long travel day the next afternoon. For us, Lake Yojoa seemed to be the perfect analogy for Honduras as a whole. Not a lot of international tourists visiting. Home to a few mosquitos. Some overlooked natural beauty that can be difficult to get to. And a lot of infrastructure in need of some love and care.